Corberts Rest offers a variety of excursions including trekking, bird & butterfly watching, mountain climbing and biking (Bring your own bikes). Your excursions will take you along narrow, sun dappled trails, through pristine countryside, across bridges spanning swiftly rushing water and wayside shrines to unknown deities. You will ford an icy cold river, cross half tilled fields, slither down moss covered rocks and take a breather on a sun warmed rock by a natural pool, your bare feet in the cool water. 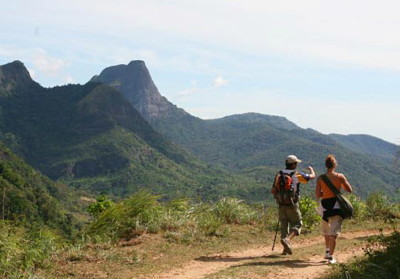 Initially it is an ascent of about 200m. At Corberts gap, ‘The Dumbara Kandavetiya’meaning Misty Mountains is a delight to the human eye. In stark contrast is the entry into the forest with its multiple storied vegetation and bird life along a relatively flat path to the small village of Thangappuwa.

After a rest for tea trek back to Corberts Rest and maybe you could observe mixed flock bird species abundant in the area. For those seeking more adventure the trek could be extended to Alugallena Cave, along narrow and undulating village paths through dense forest and open spaces . A picnic lunch at Alugallena cave with its stunning view of the valley beneath is a portrait of lush green forest ,patana grasslands and villages in the far distance.

The descent will be approximately 350m bypassing patches of dense forest with its vast variety of flowering plants ,abandoned Cardamom plantations and Vadiyas (storage houses) used by the planters of old. Little streams and rivulets on the way are a refreshing source.

At first, the descent is with "The Sphinx" watching over you until the Forest path to Kumbukgolla village hides the peaks but compliments itself with its canopy of trees and undergrowth a haven for the angels of the forest, The Butterflies. A brilliant architect is the Giant Wood Spider spinning its unique web up to one meter in diameter. Breaks in the forest canopy are a welcome to the waterfalls, and rice terraces. At Kumbukgolla, the Village Headman or the Schoolmaster will talk to you about old village traditions and beliefs over a cup of tea with kithul juggery or a home cooked meal. You could trek back to Corberts Rest or go further to Nitre Caves along narrow paths with isolated huts and its Chenas until you come to the Na Ela stream with its white water cascading down into the deep crevices and rock pools formed by its force. After a refreshing dip, the path to Niter caves is a steep climb of approximately 400 meters through fairy tale virgin forest. The long-term excavation of potassium nitrate has created the cave.

The trek takes you along the main road down to the village of Kaikawela. The road ends at Meemure a village steeped in the history of the area. The Lakagala Mountain is an imposing peak that protrudes out of the valley like a giant sentinel guarding this ancient village. King Ravana, according to legend used the mountain as a landing site for his Dandu Monoraya [a flying machine resembling a giant peacock].The peak had been used as a navigation point for incoming ships to the ancient harbor of Trincomalee.The last King of Kandy sent his two daughters to the village for safety from the British. Recently Meemure was the location for the award winning Sinhala film ‘Sooriya Arana’. A small path from the village leads you to the Dindi Oya a stream with rock pools of unparallel beauty. We could arrange a simple village lunch for you at the pools and a discussion with the village elders on the legends, which has come down through the ages. The road to Meemure is also motorable. We recommend a four-wheel drive. For the more adventurous, a trek up the Lakagala Mountain takes up to 3 hours, which is only possible from January through May.

We have described a few of the treks .Further treks include Forest paths, Tea Estates and Home Gardens, just to name a few. Walking around the near vicinity of Corberts Rest is a rewarding and pleasant experience.

A hundred and twenty eight species of birds, which includes seventeen of the twenty six endemics, are present in the region. Ten Species of Winter Migrants have also been sighted and recorded. The smallest bird in the Knuckles is the Pale –billed Flowerpecker and the largest is the Black Eagle.

At mid altitude areas mixed flock species are common with the Crested Drongo and the Orange Minivet taking the mantle of leadership by occupying the canopy. The Woodpeckers and the Nuthatches are the hunters for insects in the tree trunks. The Bulbuls, Barbets, and Flycatchers fly in short bursts between the canopies while the ground birds like the small army of Babblers forage in the undergrowth. The flock is almost in permanent communication with each other with the birds in the lower canopy and on the ground keeping an eye for predators such as snakes and those on the canopy looking out for Raptors like the Black Eagle. The Knuckles has been termed a Rugged Birders Paradise. The area in the close vicinity of Sphinx Eyrie is ideal for bird watching.

The Angels of the Forest are the Butterflies. The Tree Nymph endemic to the island is one such example. The local villages call it ‘The Angel sent down by the Fairies. Its graceful flight is a remarkable sight. More than seventy species have been recorded in the Knuckles. On the forest, floor the Brown Butterflies. Darting busily across the vegetation is the Blues .Pansies and Eggflies belong to the dominant group. A recent visitor to Sphinx Eyrie had this to say ‘I was accompanied on my morning walk by a rainbow of angels’. 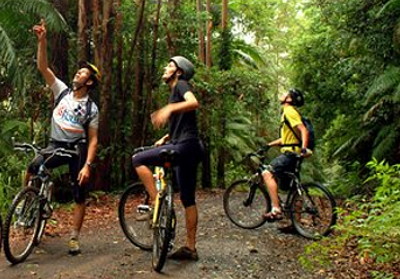 The area offers excellent challenges for mountain bikers. We recommend the narrow village paths in the areas of Meemure, Kumbukgolla, Kobonilla, and Thangappuwa. A hard but rewarding challenge would be the ride from Hunasgiriya to Meemure. The first three to four hours of this ride is along the upper section of The Dumbara Valley winding its way up to Corberts Gap. The Second stage of two to three hours is along the road to Meemure where the main peaks of the Knuckles are on view for most of the ride. 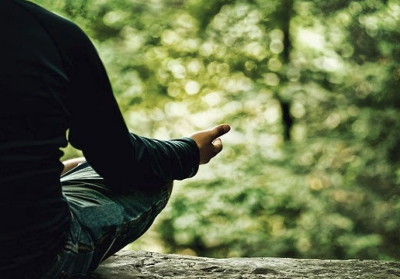 Find inner peace in many a nook and corner within our natural garden situated in splendid isolation.